Lena Hugo has been a full time artist since graduating from the University of Pretoria in 1996.

She focus her attention on pastel drawings, but her mediums also include oils, fibre arts, relief printing and occasional experiments with photography. Her highly finished, detailed, expressions of people are for the most part depictions of South African and migrant hand labourers. Her fibre artworks are most often made from re-appropriated clothing previously worn and owned by South African and migrant labourers.

Although her past thematic content has always been centred around ‘work’ as an important element of our physical survival and psychological well being, she has always shown an interest also, in our universal human condition, our transient, fragile nature and the cycle of birth, death and resurrection.

Recently she began to explore our fear of death, of disappearing or of lacking significance and how it sometimes manifests in destructive behaviour towards other humans as well as towards animals and nature. Currently she is working on a body of work exploring the ambiguous and changeable nature of power and by doing so she also questions traditional translations of gender expectations: The powerful male as opposed to the weak female.

She has exhibited her work widely in South Africa and in London, Holland, France, the United States of America and the People’s Republic of China.

She has been a finalist for for the BP Portrait Awards in London, and for most of the major and some minor art competitions for two dimensional art in South Africa. She has earned a top 10 position at the Eukurhuleni Fine Arts Awards, a top 5 position at the Sanlam Portrait Awards, and a first prize in the first pastel painting contest, organized by Collection Beaux-Arts Réaliste et Impressionniste, Montréal.

She was the festival artist for ABSA KKNK in 2011 and in 2012 she received the Bettie Cilliers-Barnard Award for painting.

She took part in the following residencies: 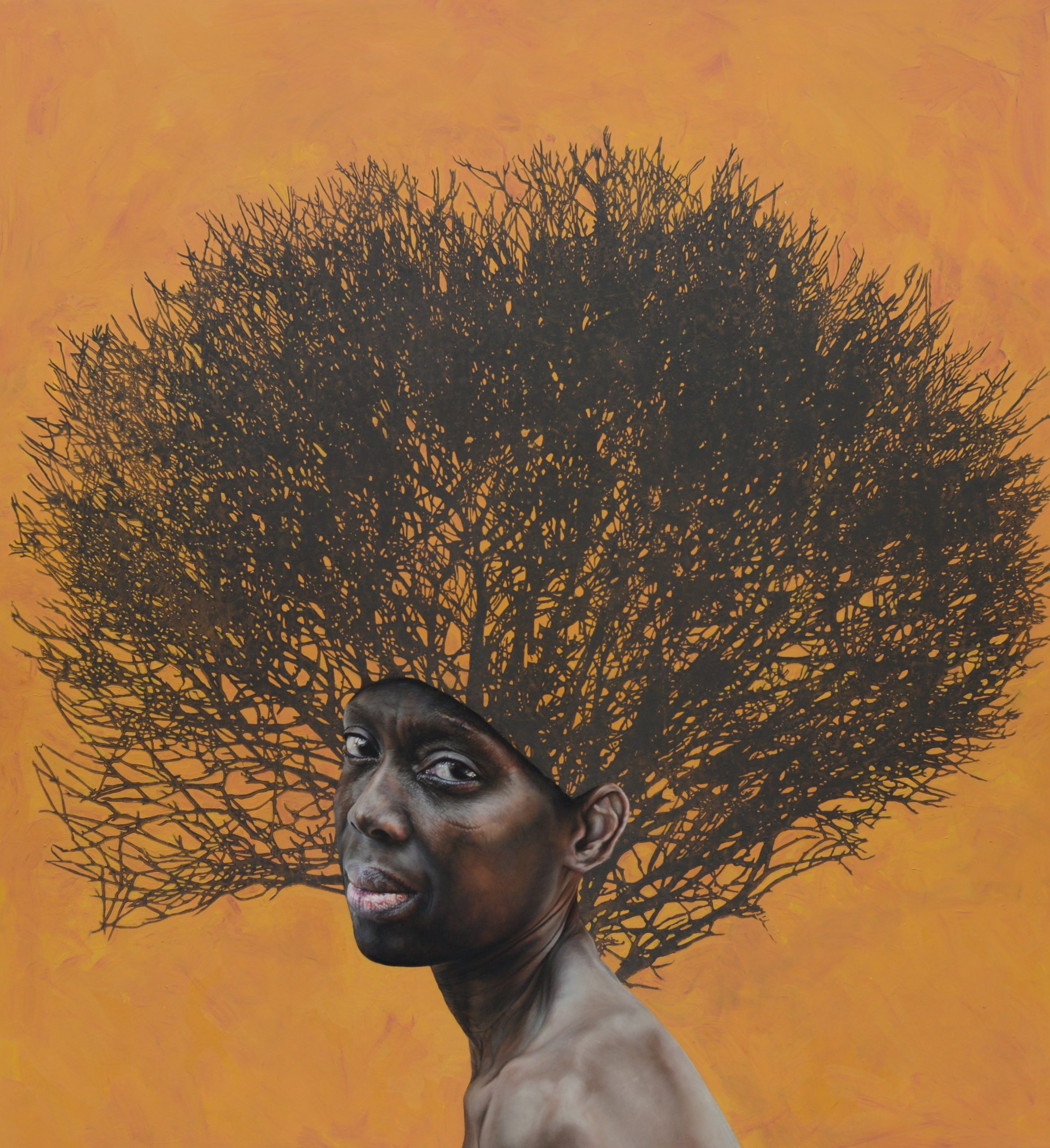 “I intend to speak of forms changed into new entities”
– Ovid, Metamorpohosis, line 1 & 2

In Ovid’s epic poem Metamorphosis Daphne, the mythological nymph of Arcadia, becomes a universal symbol of imperial power through victory. But not her own. Her total transformation into a laurel tree to escape Apollo’s advances, causes her to lose her sense of self and her autonomy. She is henceforth paraded as a symbol of Apollo’s victory and the name ‘Daphne’ is never mentioned in the poem again.
Read more 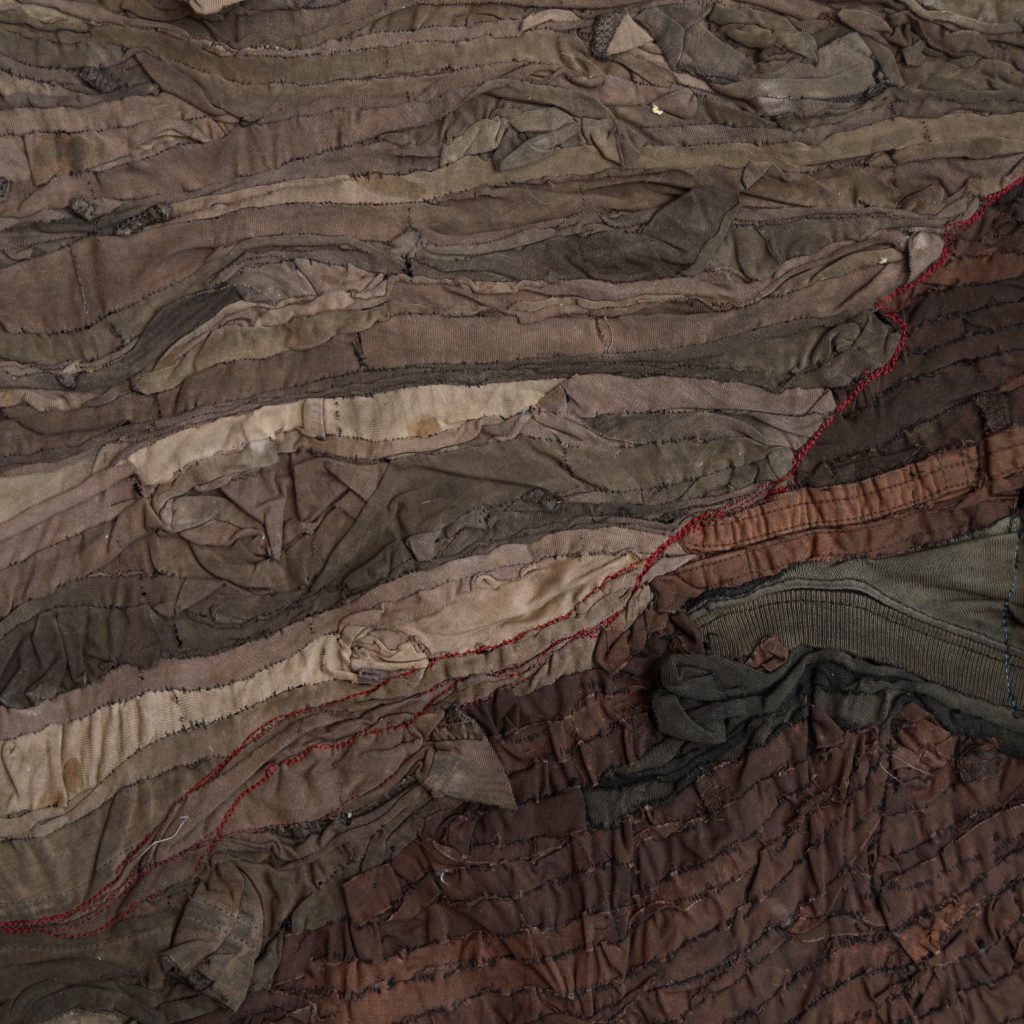 Legacy explores the unease we as humans experience with the idea of the loss of “self” which can be equalled to the fear of death and how it sometimes manifests in destructive behaviour towards other humans, animals and nature.

It is often revealed in our need to dominate, change and rule over or separate ourselves from other humans and nature or to possess money, things, land or property, knowledge, prestige and even other humans.

It also becomes apparent in our need to be remembered or to leave a legacy. 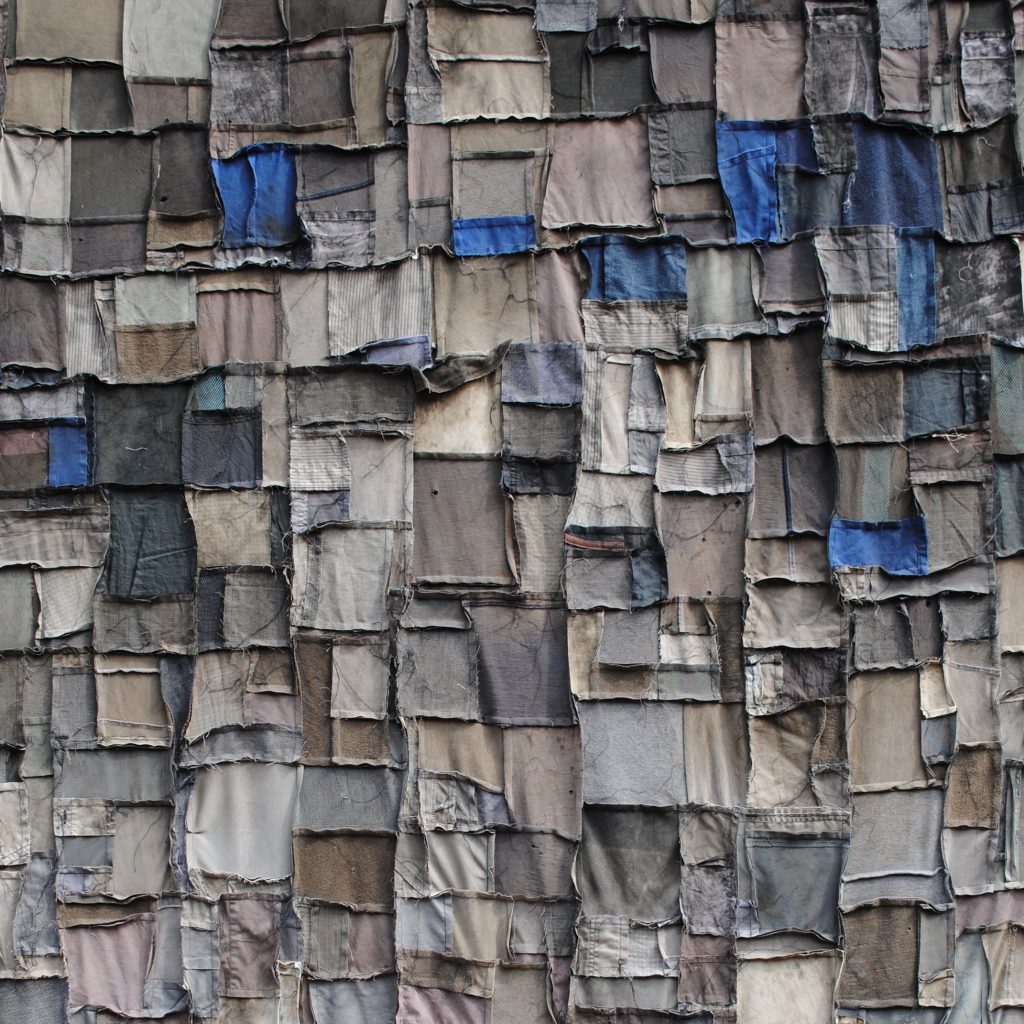 Human fragility and the cycle of life, death and resurrection are the main themes embodied in Grass People. The exhibition consists of a series of detailed portraits of sugar cane workers as well as fibre art pieces made from the clothes worn by the portrayed individuals. 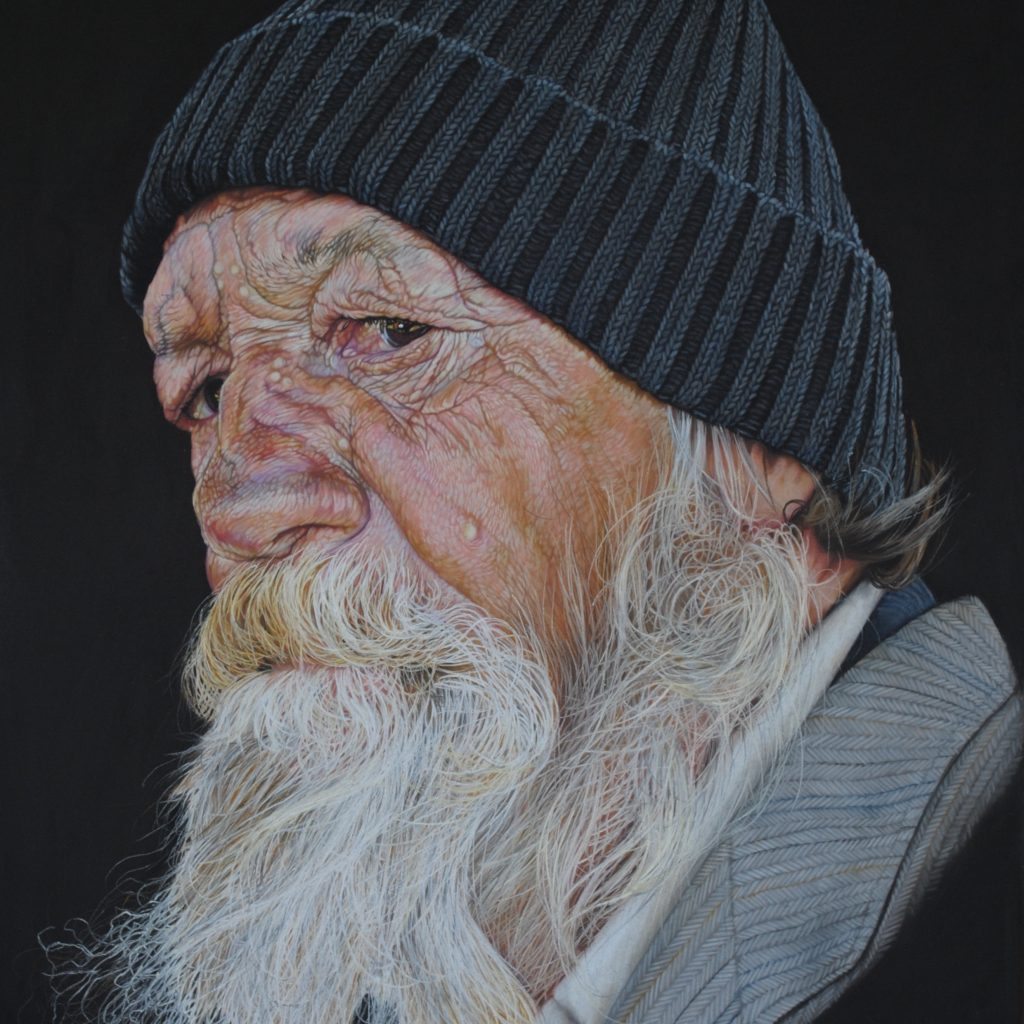 Physiognomy used to be a method of judging a person’s character by their outward facial features, originating in ancient times and gaining increased popularity during the 18th and 19th centuries.

It will immediately strike us as unfair and unscientific, and has in fact been dismissed as such by contemporary society, but in what measure do we still unconsciously assess our fellow person’s character by his or her outward appearance? 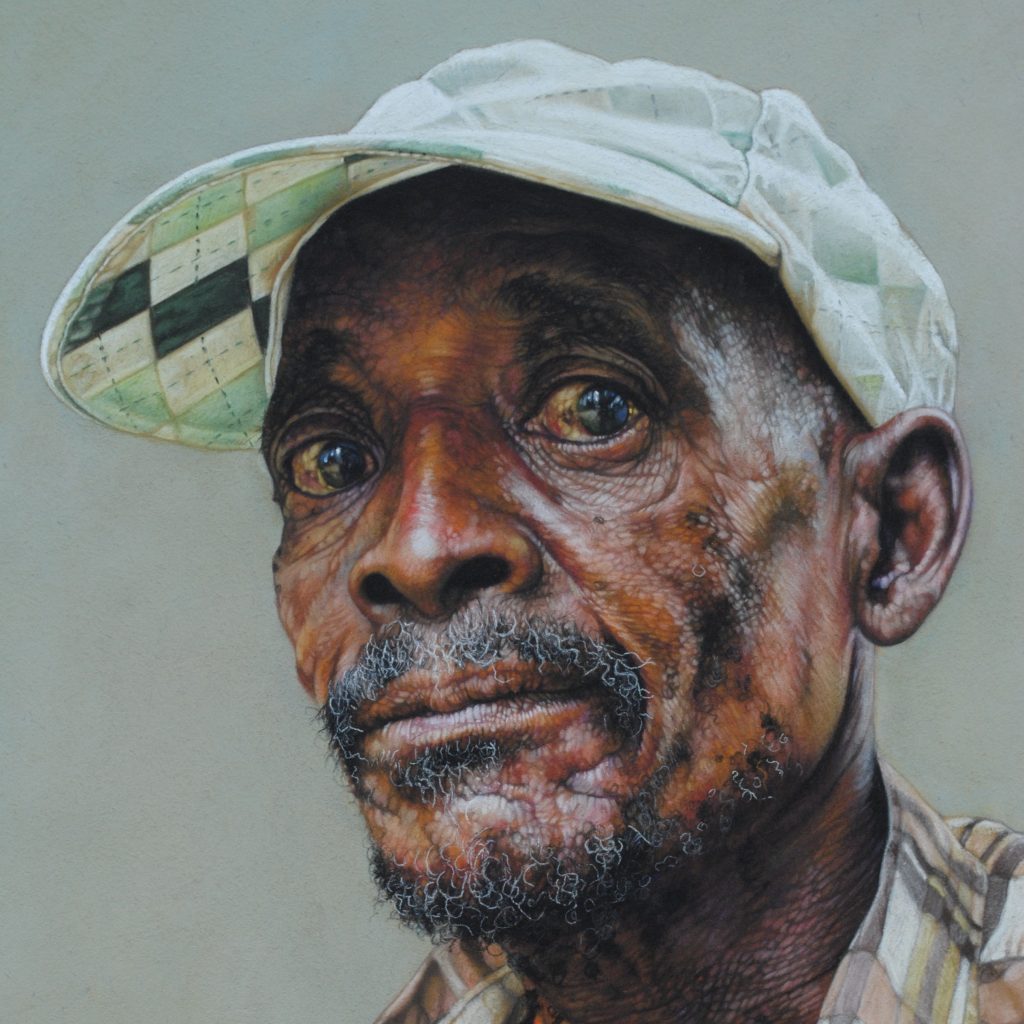 A Portrait, as a likeness of a person’s appearance, can tell us something about an individual’s identity, by providing us with information regarding their character, personality, social position, career, age and sex, within the context of a specific time in the life of that person. In the same way, it is possible that a group of portraits may portray the identity of a society, a nation or a country within a given time period. 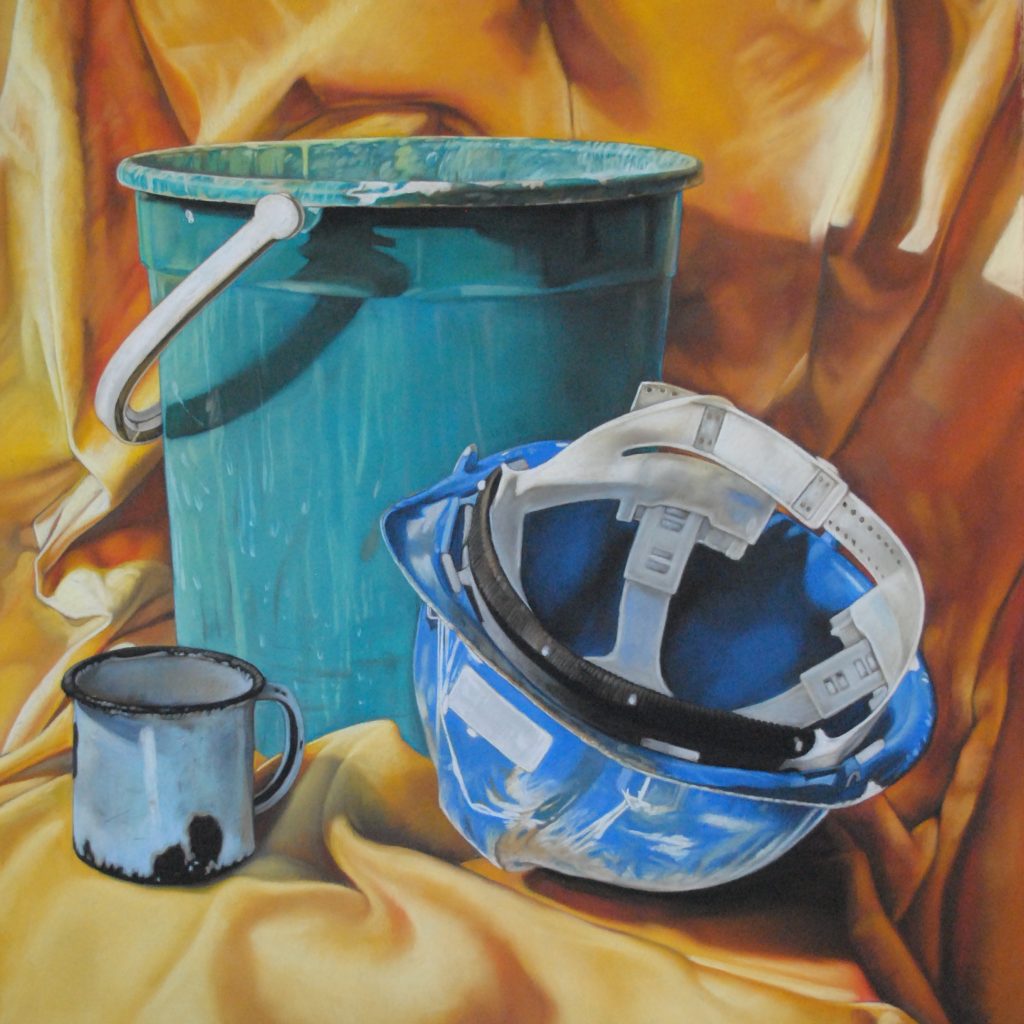 In treating the people who are often being overlooked or taken for granted - but who plays a vital role in the society and our economy - with virtuous formality and exhibiting them in a gallery, Hugo presents them to the viewer as individuals with reconsidered status and importance.